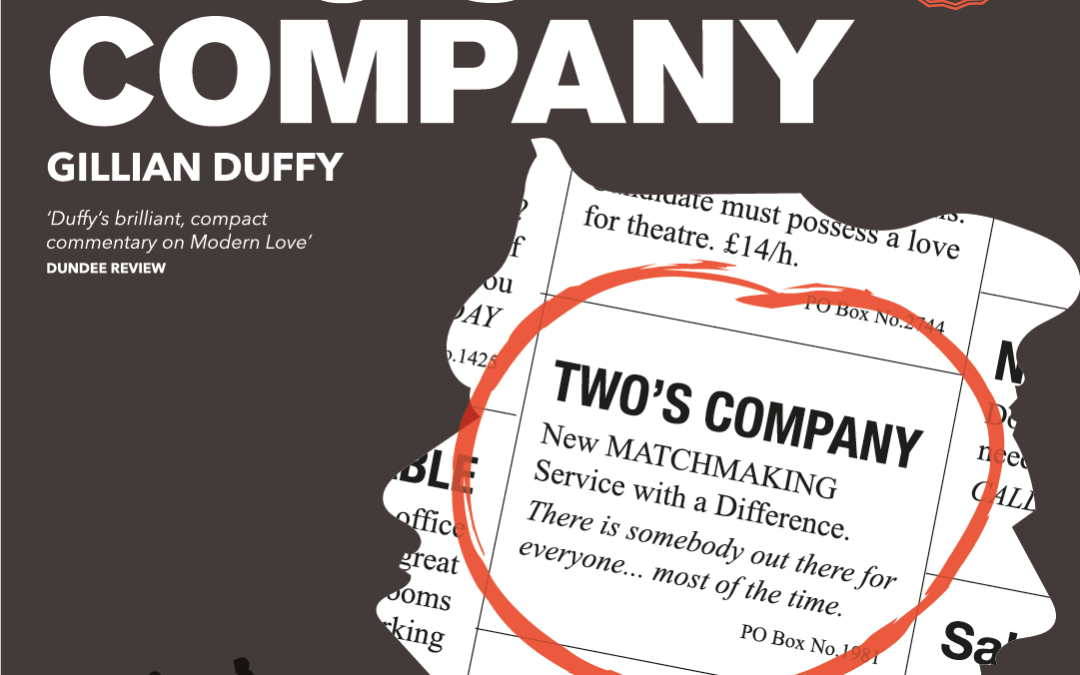 The New Comedy Drama from the Writer of The Ghosting of Rabbie Burns and Co-Writer of The Wedding Planners Gillian Duffy.

Maureen Parker is a hopeful romantic. She is also 55, twice divorced, single and the owner of ‘Two’s Company’ Matchmaking Agency, a new Dating Service for those who prefer ‘a more traditional approach’ to finding love – aka the local old-school lonely-hearts who think Broadband is a new pop group and mobile dating means holding hands on a stairlift.

Maureen’s been in the business of love for over thirty years, long before texting, swiping and poking became obligatory, but her ‘clients’ are more likely to be on Warfarin than WhatsApp, and the only posting they’re doing is sending their dating disasters into Maureen’s weekly Advice Column in the hope of some romantic rescue.

As Maureen comes to terms with spending another weekend with a bottle of Pink Gin, Alexa’s Top Ten Tearjerkers, and a pile of lonely hopefuls the tide wouldn’t take out, she receives an enquiry that rings a few unexpected bells; her first love, Michael, the one who broke her heart, is back in town…and he’s looking for a date – with her.

But does she want to see Michael again after all these years?
Can she bear to meet him for a coffee in Glasgow, back to where they first met?
And, more importantly, is Maureen ready to stop looking for love for others and find it for herself.

Matt Costello is a familiar face on TV and the stage. Best known as Stevie the Bookie in Still Game, Matt has recently appeared in the award-winning drama Vigil, Wonder Woman 1984 and a remake of Whisky Galore. His stage career is extensive, appearing at the Lyceum Theatre, Edinburgh, The Citizens in Glasgow and theatres across Scotland. Matt Costello is playing the male lead (Michael) in Gillian Duffy’s latest comedy drama, Two’s Company.

Carolyn Calder has been working in theatre, TV and Film for almost 40 years, appearing in films such as Dear Frankie, Red Road, On a Clear Day and Wild Rose. TV credits include Taggart, Sea of Souls, Dear Green Place and Emmerdale. She toured Scotland as Maggie Muff in the one woman show, 51 Shades of Maggie. Carolyn Calder is playing the female lead (Maureen) in Gillian Duffy’s latest comedy drama, Two’s Company.

In a career spanning over 40 years, Una Ailsa Nacnab has worked extensively in theatre and television, in productions such as Take the High Road, Shirley Valentine, Antigone and As You Like It, to name but a few. Una Ailsa Macnab is playing the role of Beatrice (Maureen’s mother) in Gillian Duffy’s latest comedy drama, Two’s Company.


Warning: Attempt to read property "term_id" on array in /home/server489781/ftp/aps_hosting/tivoli/wp-content/plugins/bloom/bloom.php on line 3627

You have Successfully Subscribed!